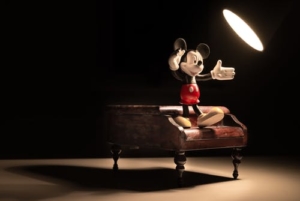 You may not have heard of these two people but they are the masterminds behind the music and lyrics to “The Little Mermaid”, “Beauty and the Beast”, “Aladdin”  and also “Little Shop of Horrors” (winning Oscars for all of the afore mentioned Disney films for Best Original Score). These are certainly my favourite Disney movies and ones that left a lasting impression on me from my very first viewing as a child.

Whether you are a fan of Disney or not, you can’t deny the magic that they created, so I wanted to honour their work by discussing it and hopefully educating a few people on who they were who may not have heard of them.

Ashman was a playwright and lyricist and Menken is a composer, song writer and music conductor.

For many people, movies like ‘The Little Mermaid’, ‘Beauty and the Beast’ and ‘Aladdin’ represent a golden time within Disney. I would argue this is heavily down to the music. In all of those films, there were catchy and clever songs that would grab your attention and have you singing them for days after the viewing. Whatever their trick was, they would create songs and lyrics that worked for both adults and children alike. They were beautifully written, but simple enough for you to sing along to and each song pushed the story along just that little bit further to help the storyline progress.

Ashman sadly passed before ‘Aladdin’ had been completed and whilst Menken has gone on to have an envious career working constantly for huge productions (writing music for ‘Hercules’, ‘Home on the Range’, ‘Enchanted’, ‘Tangled’ and many more), the lack of the lyrics from Ashman is very much noticed (that being said,Menken is the second most prolific Oscar winner in the music categories after Alfred Newman, who has 9 Oscars. He has also won 11 Grammy Awards, a Tony Award and many other honours. So his music continues to inspire!)

So the golden age for Disney has never quite been the same since that period of time which upholds my theory that these two may have been the root of it all! What do you think?

But what should be noted, is that with great new writers emerging could there be another great era on the horizon? Because who doesn’t love a good Disney film with amazing music?!