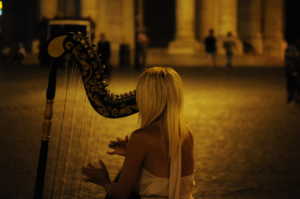 Sandra came to Key Lessons as someone who always had a dream: to play the harp. At 26 years old and having worked full-time since she was 18, she felt like she wanted to do something a little different. Sandra called us for some guidance- where do you get a second hand but good harp from?

Key Lessons has many harp tutors and they found a few being sold online that were in very good condition but used and so they were selling for a very reasonable price (new harps can sell for thousands of pounds!).

Sandra bought a lever harp for £150 and was off! She started taking 30 minute lessons but soon found she wanted to increase to 45 minute lessons.

Sandra continued to learn the harp with ease and realised she was desperate to learn one song: Claude Debussy’s Clare De Lune. Originally intended for the piano, it was her favourite classical piece and she knew it would sound wonderful on the harp. She began to learn this and realised how difficult it was as its very lengthy and the notes are spread throughout the whole of the harp.

Once she felt confident with the first half of the piece, she decided she wanted to play it for her grandmother who loved Debussy.

One Sunday her grandmother visited her at her home. She played it for her and she exclaimed ”you should be playing this at weddings!”.

This put an idea into Sandra’s head… She thought this was a fantastic idea as it would fit around her work schedule- all she would need to do is get a great repertoire under her belt and continue to improve on her skills but then should would be good to go!

Sandra has been having lessons with Key Lessons since 2015 and is aiming to start advertising herself as a wedding harpist within the next year. She has started performing at friends wedding’s as a starting point to see how she fares and what kind of songs people ask for the most.

Sandra has said to us that she is so grateful to have started learning the harp. It has given her so much joy and her family are so proud of her! She says the only issue is transporting it around to venues but she is buying a larger car in the new year to try and tackle this!