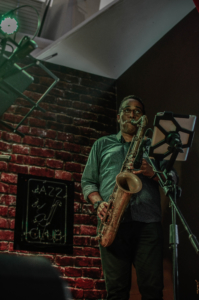 Christine called Key Lessons with one goal; to play the saxophone for her mother.

Christine was in her mid 40’s and had recently put her mother in an old people’s home as her ailments made her unable to live alone. Her mother’s favourite instrument was the saxophone and Christine and her had listened to many saxophone records whenever they were together.

Christine had a family of her own now but as the children were old enough to go to school she had more spare time on her hands than previously and thought there was no better time than now to start learning.

Christine’s mothers favourite saxophone solo was an extremely difficult one: from Bruce Springsteen’s ‘Born To Run’.

Christine heard about Key Lessons and called to ask for a tutor who would have the patience for her to learn the instrument from scratch but also know that she wouldn’t have the greatest amount of time to practice in between lessons due to having children. She also wanted someone who loved music from the 70’s as she did.

Key Lessons set up a trial with a tutor who adored Bruce Springsteen and was very experienced teaching all ages and levels on the saxophone.

Christine was happy to go ahead with lessons after the trial as she connected with the tutor immediately. She started learning the saxophone and soon released that it would take her years to be able to play the solo from ‘Born To Run’. She decided for now it would be better to learn more attainable songs to be able to play to her mother whilst she was gaining more experience and technique to achieve the solo in question.

She started learning ‘Happy Birthday’ and general Christmas songs whilst learning how to master the instrument.

Her mother was really happy when her daughter visited her. They would go into the garden and Christine would perform what she had been learning for her.

One time Christine visited the Home, the staff asked if she would play all the songs she knew to everyone- a mini- show if you will! Christine said yes but was extremely nervous as she wasn’t as confident as she would like to be.

The week after Christine performed three songs and was given the loudest cheer.

Her performance was apparently the talk of the week within the Home as everyone went to see Christine’s mother to say how much they enjoyed it and how lucky she was to have such a talented daughter!

This performance has given Christine a new spark of energy to learn the solo which she aims to perform for the Home for either her mothers birthday in September or as a Christmas treat !