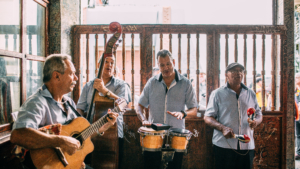 Nick was a strong cellist when he was a teenager but had since stopped playing.Now in his mid thirties he felt there was no better time to start playing again.Nick missed playing the Cello and realised it was a shame that his cello was sitting in his loft and had been for nearly 20 years!

Nick contacted Key Lessons for a patient tutor who would be able to teach someone who had forgotten his technique and theory and was re-developing lost skills . He had never taken grades and didn’t want to start them but therefore didn’t know what kind of level he was. He also needed someone who was flexible to work around his work hours .

Nick was pleased with the tutor we sent him and initially had one lesson a week. It wasn’t very long before he requested to have two lessons a week and found that learning a piece and eventually performing it to his tutor was his favourite thing to do.

Nick knew that he wanted to progress his music further and taking lessons wasn’t enough. He wanted to perform to the public! He knew that he loved performing both pop songs and classical songs and so looked into joining a local band that played a variety of music genres. This would then work around his work schedule of Monday – Friday office days and keep him practicing after work or over the weekends. Before auditioning for local bands he knew he needed many more months of tuition. This was a feasible and challenging goal for him to aim for.

He also needed help to master his audition pieces. He wanted to learn ‘Perfect’ by Ed Sheeran and ‘Despacito’ by Justin Beiber for his pop songs and then a revised version of Bach’s Cello Suite No.1 in G. These songs were a real push for Nick as the pop songs are difficult to perform accapella and the latter is very technically difficult . After some more months of tuition he eventually auditioned for a band and was accepted!

He performed with this band for over a year performing at various functions and events (including the Summer and Christmas fairs for the county which was performed on a huge stage at local parks). He loved every minute and now has started auditioning for wedding bands.

Great to be part of the start of something so inspiring and life changing to Nick!