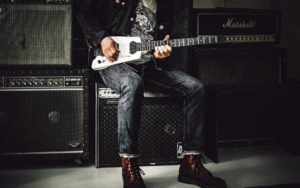 Michael was a regular busy teenage boy. He was preparing for his GCSE’S and did not pick Music as an option. He also was balancing a very busy social life. He had loved the electric guitar long before he approached Key Lessons and had achieved an intermediary level from watching Youtube videos and online tutorials. With a busy school and social life, Michael didn’t want to have lessons and felt he could achieve what he wanted from online videos alone. However he soon found that he couldn’t progress any further via that route.

He started learning the  electric guitar with Key Lessons and realised he had not achieved good techqnique from these online tutorials and this was slowing him down with playing advanced songs. The information he had also learnt from these videos was often incorrect so he needed to effectively re-learn his instrument. Even though he had a lot of work to do, after only 6 months of tuition and a lot of practice saw Michael with great technique and  able to  leap from advanced piece to advanced piece with ease. Michael was given the tools  by his tutor to start understanding and interpreting music in his own way . His tuition gave him the ability to read and write music and so he was able to play and then interpret any piece of music he wanted without a teacher being there. He was also able to understand time signatures and play around with them so he could re-invent the songs with his own personal flair.

Michaels confidence with the instrument grew with every passing week and then one day Michael told the  Key Lessons tutor that he had formed a band with his school friends . The band practiced relentlessly for many months and then they landed their first gig- at their school disco! They performed a variety of popular music covers , all interpreted and arranged by Michael! They can now be seen performing at various local fairs (namely the Wimbledon Village fair and Bridge Road Christmas fair).

It seems like it is only the beginning for them as they have no plans of breaking up now that all of the members are off to university. This is a great story that started from one persons pure determination ! Michael still has lessons whenever he comes back from University to make sure his techqniue is still how it should be and to see his tutor as they have formed such a close bond . Michael has even invited his tutor to watch his band perform and to guest star one day!

Michael says he plays his guitar every single day, learning songs of all genres in order to perform in his band and is looking to promote the band so they can start gigging nationally one day.