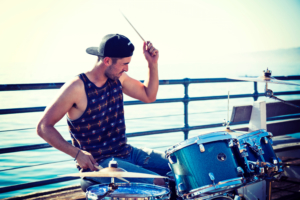 Michael was a 13 year old boy who wanted to form a band. He could play the guitar but sometimes struggled with the finger work required and had always fancied trying the drums. He had learnt the guitar from youtube videos but had never wanted formal lessons in the instrument.

Michael’s mother enquired into lessons for him and spoke to Key Lessons about having a tutor who was also a performer so they could help Michael with his performance skills but also someone who was able to work with his learning difficulties.

The Key Lessons tutor provided was a regular performer who worked in various bands and was a specialised learning difficulties tutor. He assessed Michael’s ability to learn at the trial lesson. The tutor was impressed by Michael’s interest and enthusiasm and directed his parents to a reasonably priced drum kit that came with a headphones socket!

Michael was very keen to start lessons and said that he wanted to form a band with his best friends at school as they all could play instruments. Michael’s story is one of tremendous hard work. He tirelessly practiced so that he could catch up to the level of his friends who were already competent at their instruments. He wanted to match them and so within a year he was ready to perform their first gig which Michael had arranged to have at their school Summer Ball.

With the pressure on, Michael had lessons twice a week so that he could be ready for the Ball.

When the time came they performed at the Ball and had great reviews from everyone in attendance. Michael became somewhat of a celebrity at his school thereafter as he was a very charismatic player and they have since played at the school Summer Ball three years in a row.

Michael is a very strong musician and has said that when he leaves school he wants to go to a college that provides courses in music production as he wants to have a career in music. He also has a goal to perform with a live orchestra one day and so is still a member of his band and is pushing for broader performances outside of the school Summer Ball to see if he can make his dream come true!