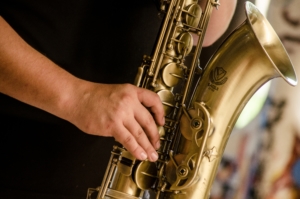 Joseph started saxophone lessons at 6 years old when his grand father gifted him a ¼ size saxophone for Christmas one year. Joseph was over the moon and started having lessons at his school. He fell in love with his saxophone and practiced every day outside of his lessons.

Joseph started having to miss lessons as he began to have chest problems and suffered from a persistent cough. He also found was getting neck pain and slowly he started to play less and less and have fewer lessons.

His mother was concerned as his health had not completely returned back to normal and it was only when he stopped his lessons altogether and stopped practicing that she realised it must be related to his saxophone. She had asked Joseph’s old tutor if that was common to which he said it was not and that nothing could be done.

After a few months without lessons it became apparent that Joseph was missing his lessons. She thought of going back to school lessons but decided to try private lessons as Joseph had mentioned his tutor was a little old fashioned.

She called Key Lessons and stated she was worried that playing the saxophone affected Joseph’s health but wanted to pursue lessons with a fun and young tutor.

Key Lessons arranged a trial lesson for Joseph. At the trial Joseph’s mother told the Key Lessons tutor his previous health problems and the tutor immediately looked at the strap he had been advised to purchase from his previous tutor and noticed that it was so thin that it wasn’t supporting his neck properly. He also took the Saxophone apart and showed Joseph how to clean the instrument- this was also something he had never been shown before. An unclean instrument is usually the root of associated chest problems.

Joseph started having lessons and working on his favourite songs and noticed that all his previous issues had not returned. Key Lessons had agreed that Joseph’s mother could pay lesson by lesson rather than booking a block of lessons as they were very unsure if his health issues would return perhaps after a few more lessons.

They took each lesson one by one and then after a month, Joseph’s mother booked a block of lessons as none of his issues returned. She called Key Lessons to say how elated she was with the tutor. She is so happy to see Joseph enjoy his lessons and wish they knew the root of the problems earlier! She has also praised the tutor for teaching Joseph songs he knows and loves and for being very focused on connecting with him . A wonderful case for us to share with you!