Does Learning Music Help Students Do Better In School?

Does Learning Music Help Students Do Better In School? 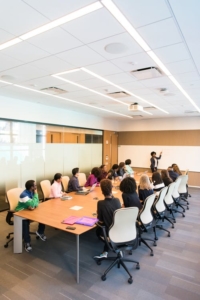 Music has been very well documented as helping people who are studying to be better students but in what ways? Is it as simple as putting on some Mozart whilst cramming for an exam to help the information penetrate the long term memory, or is it deeper than that?
Lets take a look!
Early exposure to music can boost brain development.

A strong body of evidence indicates that music can play a role in improving academic performance. A 2005 University of North Carolina at Greensboro report, for example, points out that several academic studies have found a general increase in test scores across academic disciplines for students who participate in music programs or play a musical instrument.

This could be down to many factors: better memory from playing musical instruments due to needing to remember pieces of music, musical notation, musical language etc. Perhaps learning music uses a different part of the brain as you are speaking a language that isn’t translated back into your native tongue so it need to be processed in a different way to other information Also music is emotional and so this will tap into a different part of the brain, therefore increasing brain development and power.

For the first two or three years of life, children’s brains are rapidly laying down connections. If these connections aren’t used, the brain “prunes” them to focus on connections a child regularly uses, according to the textbook “Child Psychology.” Children who are exposed to music during the first few years of life develop additional neural connections that can help them master musical skills down the road. These connections don’t just play a role in music, though. Exposure to music can help children master spatial reasoning, symbolic thinking and critical thinking skills, each of which plays a major role in academic achievement.

This is also true for learning languages- have you struggled to learn and retain words or information as you get older? Or seen how easy it is to teach a child a second language in comparison to trying to learn it when you are older? Music is a language in itself so this supports the theory of teaching children music younger will help them as they get older!

In their book, “Welcome to Your Child’s Brain,” neuroscientists Sandra Aamodt and Sam Wang argue that impulse control is one of the best predictors of academic achievement and adult success. They emphasize that playing a musical instrument helps children develop impulse control. From mastering fine motor skills to patiently learning to play chords, children who participate in music education learn to patiently work on a skill, creating what Want and Aamodt call a “mastery orientation.” This mastery orientation helps students understand that regular, diligent practice is key for achievement and this helps them to develop the study skills and diligence they need to excel in school.

It’s no secret that playing music requires good listening skills. Kids who participate in music programs, music exams,  or play an instrument have to know what music sounds like and carefully imitate the sounds they hear. A 2010 study published in “Nature Reviews Neuroscience” found that music education produces a modest increase in listening skills. Students who can listen patiently in class are better equipped to take in information and master academic skills ranging from math to reading.

Music and math are inextricably linked. From counting out rhythms to reading symbols, the skills students learn in music can translate into a boost in math test scores. The “National Education Longitudinal Survey” by the U.S. Department of Education found that students who were highly involved in music programs showed a boost in mathematical achievement and proficiency in secondary school.

So to sum up, music GREATLY helps students be better students when in school or otherwise! Music doesn’t JUST help students but those who have learnt music often find they have greater memory capacity, ability to learn things quickly and take in information. So if you haven’t learnt music in a while, or ever, then hopefully the above article has convinced you as to why now is the time to do so!