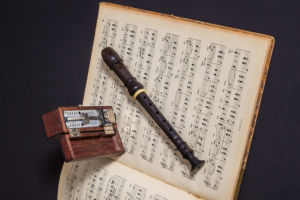 Cedric’s son has Autism and ADHD and he has long been searching for a tutor with capabilities of dealing with the two syndromes in an effective and patient manner. He was also unsure of what instrument to learn and so asked for Key Lessons advice. Key Lessons sent a tutor for a trial that could teach several different instruments and brought most of them along with them to the trial (flute, recorder, voice & guitar). Cedric found his son immediately bonded with the recorder and so they booked a block of lessons. The tutor provided by Key Lessons is a specialised learning and physical disability tutor who had years of experience working with Autistic and ADHD students.

Cedric’s son started lessons and was really excited every week for his tutor to come over for the lesson. He showed good progression right from the start.

Exams was never a priority for Cedric or his son but as the lessons progressed Cedric’s son asked to try grade 1. He wanted to have a certificate just like most of his friends who had studied an instrument. For a year they prepared for grade 1 recorder. Cedric’s son had a lot of anxiety in the coming weeks before the exam. The tutor had noticed that he seemed overwhelmed so they had a few fun lessons to try and ease his tension. They then had extra lessons before the exam which really helped Cedric’s son as he felt really comfortable with his ability before the examination date.

The Key Lessons tutor accompanied Cedric and his son to his exam and kept conversation light to distract him from becoming anxious. Cedric’s son went in for the exam and when he came out he said he had made silly mistakes due to his hands shaking and his nerves. He actually said the process wasn’t as bad as he thought it would be and that the examiner was nice!

When the results came it was nothing but good news- he had passed and the examiner had written very promising notes.

Cedric’s son is now extremely eager to do his next grade saying that now he knows what the exams are like he won’t be as nervous!

Cedric has been delighted with the results and has been a regular client since 2014.

A lovely story showing the power of the efforts of everyone involved resulting in wonderful things!