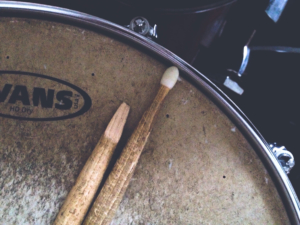 Jessica was a 19 year old girl who was in her first year of university.

She was finding university really difficult and stressful. She was also away from home for the first time which she was finding challenging.

Jessica spoke to her mother about stress relieving tips and her mother had suggested learning a musical instrument.

Her mother played the piano as her hobby and always tried to get Jessica into music lessons when she was a child, but this had failed on numerous occasions.

Jessica’s mother had found that playing an instrument after a hard days work released a lot of her tension and cleared her mind. She thought Jessica should seek some lessons and see how they went.

Jessica had had music lessons in the guitar, piano and clarinet but had not bonded with any of those instruments.

She wanted to try a percussion instrument as she had not done so yet and thought it would be a great way to take her mind off her studies and give her stress relief.

She approached Key Lessons with the hope of having lessons at the tutors home as she did not have a drum kit and was not able to have one in her university accommodation. The university had a music room, which had two drum kits in it.

She would have access to this room and would use it to practice in between lessons. Key Lessons spoke to their drum tutors and got back to Jessica with one that was local to her university. They started lessons and Jessica became obsessed with learning the instrument. She started off having one lesson weekly but found it so exciting and simultaneously therapeutic that she asked for two lessons every week.

Jessica had been missing home and knew her mother adored the piano. Having music lessons now gave her more to talk about with her mother and made her feel more connected with her whilst being away. For her first Christmas away, Jessica’s mother bought her 4 drum lessons, as she was aware she was working many hours at her retail job to pay for the lessons.

Jessica has been a student of Key Lessons since 2017 and is progressing extremely fast. She has said that learning the drums has helped her with her studies as she feels less stressed and more able to focus on them. She also feels more settled being away from home as she has something exciting to look forward to every week.

Jessica has now set her sights on something new:

she is trying to set up an all female band and wants to perform at various university end of year balls! We wish her the best of luck!