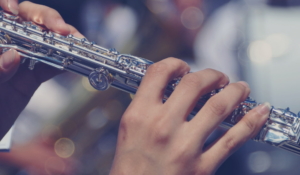 Martin was a 24 year old who came to Key Lessons extremely eager to learn the flute. Martin had been diagnosed with Multiple Sclerosis 3 years prior.

He approached Key Lessons as we have specialised learning and physical disability tutors available . Martin suffered from a wide range of symptoms that would require a specialised tutor to work with him . He was very candid to us about what they were as he didn’t want to waste anyone’s time and wanted to make sure he got a good match .His symptoms included  vision problems, pains, tingling, numbness or spasms in his limbs, cognitive issues including small attention span, inability to memorise information for a long period of time and confusion.

Key Lessons had a few staff members who had worked with clients who had MS before so Martin had his pick!

He trialled with a tutor only a few days after his original phone call.

During the trial Martin suffered from fatigue in his arms and the tutor demonstrated straight away what to do, including some tips to help relieve the aches.

After the trial, Martin called Key Lessons straight away to book the tutor for more lessons having said he knew straight away they were the right tutor for him. Martin specifically pointed out that the tutor didn’t make him feel at any point that he had a disadvantage learning a musical instrument and made him feel that nothing was a problem that they couldn’t work around together.

They started straight away and Martin asked that he play a song for his mother for her birthday, which was in 8 months time. Martin was a huge Harry Potter fan and so asked the tutor to learn

Hedwigs theme from the film score (written by John Williams).

Martin still had to learn the flute from scratch so he had a lot of work to do .

He showed great passion from the start and told his family and friends he was having lessons; which delighted them as he was so worried his MS would hinder his ability to learn an instrument in the past.

The time came for Martin to perform for his mother and he did so. He performed very well and smiled the whole way through! His mother cried throughout the entire performance and told Key Lessons that she was overwhelmed with pride for her son and couldn’t believe how much he had achieved in such a small space of time.

A beautiful story of hard work and a can-do attitude.