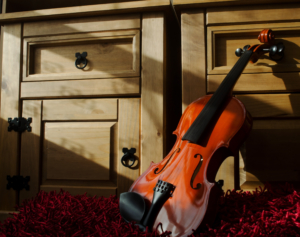 Sarah had reached grade 8 level with the violin in her twenties and now, some 20 years later,  had realized that she had stopped playing completely in recent years and what a shame that was.

Sarah now had a 6 year old daughter and she had expressed interest in learning the violin. Sarah felt now was the perfect time for them both to have lessons as Sarah had more free time now her daughter went to school everyday and that her daughter was at an age where she could really learn and retain information.

She tried to find a tutor herself and spent many hours searching online, making calls and texts to friends and trialled a tutor. Sarah said she was great for her daughter but not for her. She then repeated this process and trialled a tutor who was great for her daughter and not for her so she considered not having lessons for herself and just having them for her daughter. But then she heard of Key Lessons and she approached us in the hopes that a database of tutors could mean that she could trial several tutors if need be in order to find the right match for the both of them and she wouldn’t have to do any of the leg work!

Key Lessons provided a tutor for a trial and after the first attempt, Sarah and her daughter booked 5 lessons. Sarah would have her lesson after her daughters and found that her daughter would often ask to sit and watch her mothers lesson. Sarah says this has made a stronger bond between the two of them as her daughter sees her mother in the same situations as herself and sees how she overcomes her obstacles. The Key Lessons tutor started teaching both of them part of a simple duet. Each of them would practice their part in their lesson and then one day they put the two parts together to great success! They spend a lot of time practicing together to perfect the duet. Sarah says she feels closer to her daughter than ever!

Sarah’s daughter has started learning solo pieces to perform at her class ‘Show and Tell’. She says she will dedicate the song to her mother!