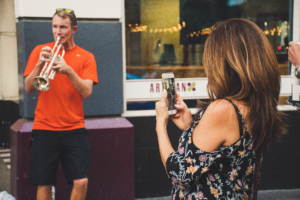 Jacob came to Key Lessons as a compete beginner. He was in his early 50’s and had more time to himself now his two children had left for university.

Jacob always loved the trumpet but as he started his own company when he was in his 20’s, never found the time to focus on learning an instrument earlier in life. Now he wanted something to focus on musically and that had always been one instrument for him: the trumpet!

Jacob asked Key Lessons for a tutor who shared a love for Miles Davis. He always loved his music and the first song he wanted to learn was ‘Time After Time’.

He knew that it was a song his wife and children would recognise and he could focus on playing it for everyone when the children returned at Christmas time.

Being a complete novice, it took Jacob a while to get used to the trumpet but he soldiered on and started with great enthusiasm and showed great development. After a month or so of lessons Jacob started to have issues with his lip. He had had a minor skiing accident over a decade ago but had a deep cut on his lip which had scarred. This caused him issues when playing the trumpet as the reverberations aggravated his scar tissue. The Key Lessons tutor knew of a few specialist mouthpiece maker who made a piece that would not touch his scar tissue. This caused an annoying set back for Jacob but it wasn’t long before he had the new mouthpiece and went straight back into lessons!

Once over that hurdle he progressed greatly and felt confident enough to Skype his children weekly to play his songs. They loved their calls and to watch him grow on his musical journey whilst being away from home. The children called eagerly every Sunday to see how their father had progressed and this gave him a spur to make sure that he practiced every week.

When the children returned for Christmas he played a mini concert to them all ,which, of course included “Time Afer Time” and many other hits played by Miles Davis.

Jacob has been having lessons for over 3 years with Key Lessons and his Christmas concerts get better and better every year! Jacob has said he has a new enthusiasm towards his semi- retirement knowing he will have the company of his trumpet!